Johannes Fried, Donation of Constantine and Constitutum Constantini: A Book Review (Part I) 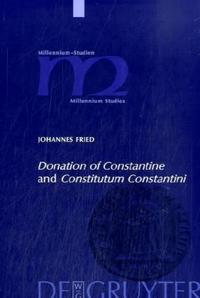 I have returned from the dead, and it’s time for this blog's inaugural book review. In 2007, Johannes Fried came out with a short study of that most famous of all medieval forgeries, the Donation of Constantine:

Donation of Constantine and Constitutum Constantini: The Misinterpretation of a Fiction and Its Original Meaning (Walter de Gruyter: Berlin/New York, 2007). 201pp. $83.01 at Amazon.com.

This book is the most recent publication to make deeply significant and wide-ranging claims about the Pseudo-Isidorian forgeries, so we’ve got to deal with it. First, though, you might want to reacquaint yourself with the fabled Donation. I know we all had to memorize it in elementary school, but a reread never hurts. Old translation online here; Wikipedia article that Fried would disagree with here.

And here's a helpful thirteenth-century illustration:

Anyway, according to Fried, scholars have grasped the Donation of Constantine the wrong way around. This is because “Recollection plays tricks with past reality; it reconstructs it and constantly creates it anew.... The reality of forgeries is not immune from such distortions, and once they have become the subject of memory they themselves can be forged and altered dramatically” (35). All this time, we moderni have been reading and debating the origins of the Donation of Constantine – the forgery as reinterpreted and essentially reinvented in the High Middle Ages. If we want to understand where this thing came from, we’ve got to inquire after the origins of a separate entity – the Constitutum Constantini, which was invented in the Early Middle Ages for entirely different purposes. In other words, we've come at the Constitutum confused by a lot of unwarranted preconceptions and baggage inherited from high medieval legal scholarship.

But that's not all. Influenced by the readings of “canonistst and propagandists of the 11th, 12th and 13th centuries,” we have not only misunderstood the contents of this famous forgery; we are mistaken in our attempts to date it to later eighth-century Rome and attribute it to the papal chancery. Fried aims to show that the Constitutum was in fact forged by Franks in Francia, not in the late eighth century but in the ninth, and by the same circle of people responsible for the forgeries of Pseudo-Isidore. Fried suggests either the Abbot Hilduin of Saint-Denis or Wala of Corbie as the most likely perpetrators. All of that naturally makes Fried’s opus very relevant for this blog. If he’s right, I’ll have to add a sixth seventh introductory post explaining the can of worms that is the Constitutum Constantini. We’ll have another data point for the aims, biases and ambitions of the forgers. Fried’s book will become required reading for anyone hoping to expose the mysteries of Pseudo-Isidore’s forgery workshop.

Unfortunately, though, and despite my considerable respect for much of Fried’s other work, I do not find his argument convincing. He’s right to question the connection between the Constitutum and the papal chancery of the later eighth century – the evidence on this front has always been weak. And his final chapter on the Pseudo-Isidorian forgeries is full of valuable insight and analysis; I have a forthcoming article on the decretals that cites this chapter repeatedly and that finds further evidence to support some of Fried's more tentative conclusions in these pages. I cannot, however, agree with his reading of the Constitutum or his attempt to assign the forgery to Pseudo-Isidore or Pseudo-Isidorian circles. Over the next several days, through several installments, I will explain why.

Forward to Part II or Part III.
Posted by Eric Knibbs at 1:10 AM