Another Component of the Forgery Complex, or, Pseudo-Isidore's Autograph 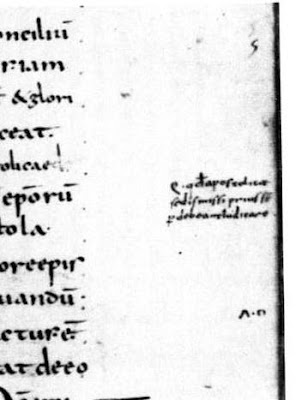 Invisible readers,
nonexistent
discerning commenters, I have neglected a crucial piece of information, and your imagined reproaches have haunted me day and night. Herewith a final and belated addition to the various background posts (linked in the sidebar).

Last month I described the other forgeries associated with Pseudo-Isidore. These include the forged capitularies of Benedictus Levita, the Capitula Angilramni, the HGA and the newly-discovered Collection Danieliana. Well there's a fifth piece that I missed, identified by Zechiel-Eckes in the wake of his important discovery.

It's a collection of excerpts from the acta of the Council of Chalcedon, and it bears this clumsy rubric: Nonnullae sanctiones sparsim collectae actionis primae sancti et magni Chalcedonensis concilii, which we might translate loosely: "Some statutes collected here and there from the decisions of the first, holy and great Council of Chalcedon." The title is nothing if not descriptive; the text occurs in twenty-three MSS. The excerpts concentrate on episcopal power, Roman jurisdiction, and secular interference in ecclesiastical affairs; in some places the text has been interpolated or otherwise inauthentically revised.

Now scholars have long known that this text was one of Pseudo-Isidore's ingredients, as bits and pieces of it crop up in the false decretals and Benedictus Levita. But they'd always ascribed the collection to Bishop Verecundus of Junca, a sixth-century Three Chapters dude. So inauthentic revisions aside, this was just put on the shelf with the rest of Pseudo-Isidore's spice cabinet/source library. There were never any good reasons to ascribe the collection to Verecundus, though (his name's not on it, to start), and in the 1970s Karl Georg Schon proved that Verecundus never could have been the compiler. The collection draws on the Chalcedon acta as edited by the deacon Rusticus between 564 and 566. Verecundus died in the early 550s, so that cuts him right out.

If Verecundus wasn't responsible for this little collection, who was? You see where this is going. Schon pointed out that the Nonnullae sanctiones rarely occurs in MSS that don't also carry the false decretals; most often it functions as a kind of appendix to Pseudo-Isidore's magnum opus. Decades later, Zechiel-Eckes showed that our little compilation was assembled directly from Paris, Ms. Lat 11611, a ninth-century Rusticus manuscript from Corbie (surprise surprise). Nearly every passage that makes up the Nonnullae sanctiones is marked off by marginal notes in this manuscript. The system of marginal annotation is identical to that found in the other manuscripts that our forgery team used.

So Pseudo-Isidore drew up this collection of excerpts from Rusticus, and worked it over a bit in the process. He put it to work when he drafted the false decretals. For good measure, he also circulated it separately as an appendix to his larger decretals collection.

As I said above, the Nonnullae sanctiones has some of the Chalcedon texts in interpolated form. As you might expect, these interpolations correspond to marginal additions in Lat. 11611. This means that we have Pseudo-Isidore's autograph -- or, more accurately, one of his autographs. That's the picture that heads this post, which I've snipped from Zechiel-Eckes's article. The marginal annotation is one of Pseudo-Isidore's inauthentic additions to the conciliar acta; it reads "...quod apostolicae sedis missi prius semper debeant iudicare..."("...which the messengers of the apostolic see should always judge beforehand...": a lot of the interpolations have to do with papal prerogatives).
Posted by Eric Knibbs at 8:54 AM