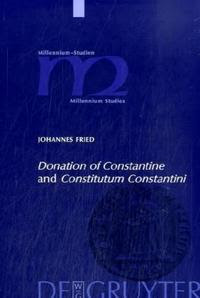 His reasoning was simple and worth recounting, because it brings us up against the important matter of the early textual tradition of the Constitutum. By Schafer's time the manuscript sources for the Constititum had already been exhaustively investigated. People thought the earliest medieval manuscript was Paris, Bibliothèque nationale de France, Ms. lat. 2777, a formulary from the monastery of Saint-Denis that they wanted to date to the beginning of the ninth century. They also knew that the Pseudo-Isidorian decretals included a copy of the Constitutum Constantini, and that the earliest Pseudo-Isidore manuscripts date from the middle of the ninth century. The manuscript tradition thus seemed to tell a story: First someone invents the Constitutum Constantini, then Pseudo-Isidore finds it lying around, sticks it in his collection, and in doing so brings it to the attention of the world.

Schafer Williams, though, worked out that everyone had the date of Ms. lat. 2777 wrong. It was a later -- not an earlier -- ninth-century manuscript. This means that Pseudo-Isidore, in fact, offers our earliest manuscript access to the Constitutum. From there Williams succumbed to the temptation to ascribe the Constitutum to Pseudo-Isidore himself.

The attribution did not stick. Horst Fuhrmann refuted his thesis by citing that classic maxim of Ulrich Knoche: recentiores non sunt deteriores -- that is, there's no reason that younger manuscripts cannot have better or earlier texts than older manuscripts. In fact, as Fuhrmann showed, Ms. lat. 2777, though not the earliest manuscript, does indeed carry the earliest recension of the Constitutum. It thus has better text in a number of places than the Constitutum on offer in Pseudo-Isidore. It's closer to the Actus Sylvestri -- the single most important source of the Constitutum -- than the texts that occur in Pseudo-Isidore's forgeries. In one instance the Constitutum uses a Greek word (συγκλίτης) that someone somewhere on the Pseudo-Isidore side of the tradition appears to have misunderstood and replaced with the Latin word inclitus, corrupting the sense. The Constitutum calls Sylvester almificus, an appropriate adjective for the pope widely attested in other early medieval sources; the Pseudo-Isidore recension calls the pope magnificus, a far less appropriate word typically used for secular magnates.

The copy of the Constitutum in Ms. lat. 2777 is thus entirely independent of the Pseudo-Isidorian decretals. It's an earlier recension -- one that Fuhrmann christened the "Frankish version." Pseudo-Isidore offers a slightly deteriorated copy of this recension. This pretty much does away with attempts to argue that the Constitutum originated as a constitutent of the false decretals. Nor is that all. Horst Fuhrmann has pointed out that, while Pseudo-Isidore gives the patriarchal sees in their usual order (Rome, Alexandria, Antioch...), the Constitutum sticks Antioch before Alexander -- a fairly serious difference. And there are further striking devitations in vocabulary, technique and subject matter that force us to put ever more distance between Pseudo-Constantine on the one hand and Pseudo-Isidore on the other.

All of this limits Fried's argument. At one point he seems to suggest that that later scribal corruption, and not Pseudo-Isidore, might be responsible for the textual defects in Pseudo-Isidore's Constitutum noted above,* but he does not press the point and allows that there need be no direct connection between the two forgeries. The two may have been forged by people with similar motives and in the same circles, but -- as he sees it -- the author(s) of one need not have been the author(s) of the other. At the outset, then, we see that the relevance of Fried's book for anyone wanting to read the false decretals is somewhat limited. We still have to approach the forgeries of Pseudo-Isidore on their own terms.


Back to Part I. Forward to Part III.

* While it's always helpful to keep the vagaries of transmission in mind, we should also remember that among the earliest manuscripts of Pseudo-Isidore is Vat. lat. 630, copied perhaps ca. 860 and almost certainly from Corbie, Pseudo-Isidore's home monastery. Vat. lat. 630 contains each of the defects listed above, so there's not a lot of space for post-forgery scribal corruption.
Posted by Eric Knibbs at 4:35 AM