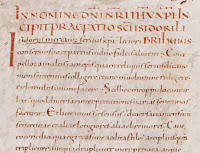 I nearly forgot. Why do we call him the Pseudo-Isidore?

Because of the preface, where someone who calls himself "Isidorus Mercator" -- Isidore the Merchant! -- claims to have assembled the whole collection.

Obviously there is no such person; he's a figment of our forgers' imagination. The temptation has been to associate this fictional Isidore with Isidore of Seville, and this does make a certain amount of sense. The Pseudo-Isidore is just an enlarged Hispana, as we said last time, and the name "Isidore" obviously adds to the Hispanic aura of the collection. Yet Isidore of Seville was never called a "merchant." The best thinking on this front is that our forgers borrowed the by-name from Marius Mercator.Our Pseudo-Isidore is thus an odd conflation of two historical characters: the Spanish church father/encyclopedist Isidore, and the translator/anti-Pelagianist Marius.

More on the preface soon.

Oh yes, and picture related. It's from fol. 3v of New Haven, Beinecke Rare Book and Manuscript Library Ms. 442 -- a mid-ninth-century copy of Pseudo-Isidore (one of a few Pseudo-Isidore manuscripts with full reproductions available online -- to see other pictures from the same book, search for "MS 442" here).

This picture shows the beginning of the preface. Click to enlarge and you'll see the first two words of the entire collection, Isidorus Mercator, right under the rubric. Some later reader has even underlined them for you.
Posted by Eric Knibbs at 5:52 AM