Anatomy of a Forged Decretal

Your explorer has returned from The Zoo, tired but full of thoughts, which basically means I'm going to afflict all of you with more analysis. I can hear your groaning through the intertubes. As penance, I promise to post a meaty overview of the first Alexander letter once I've recovered and made my way back to my office.

I've said this once or twice before, but it bears repeating: The really striking thing about reading these forged decretals is their uniformity. However our forgers went about drawing up all these fake documents, they did so according to a rough, fluid template. I'm not saying that every decretal is exactly the same, but most of them are enough like one another to permit some broad generalizations.

So say you want to cook up your own forged decretal, in the style of Pseudo-Isidore, at home. How do you go about it? Well you need these elements:

1) The address. Discussed earlier and still to be continued.

2) Introductory and concluding formulae. Frequently the arenga-like lead-in will be spliced together from the letters of Leo or Gregory; other times it comes from one of the Hispana decretals. Our forgers never seem to worry all that much about thematic coherence. The letter will start out with some disquisition on heresy or charity or whatever, and then suddenly Pseudo-Isidore will cut all that short and launch into a tirade against peregrina iudicia. Often the final clauses of a letter will come from the same source(s) as the introductory clauses though. To give the letter a sense of unity? Or because intros and conclusions were produced by the forgery workshop in batches?

3) The historical hook. (Optional.) Pseudo-Isidore wants his letters to fill some sort of historical role. As we said before, if the Liber Pontificalis ascribes some liturgical or ecclesiastical innovation to one of our forgers' popes, they often draw up a letter that starts out with that pope enacting said innovation. Usually it's just a paragraph or so, but our forgers really went overboard with Clement. The Recognitiones not only ascribed all kinds of words and deeds to Peter's successor: there were also a few letters circulating bearing his name.

4) The meat. This is almost always about accusations against priests generally and bishops specifically. If it is about accusations, all the key terms will come out of Benedictus Levita or the Capitula Angilramni. The forgers only rarely take over entire capitula unedited from either of these sources, though. Rather, they borrow odd keywords and catch phrases from disparate locations and sew them up into tightly constructed two- or three-hundred-word paragraphs.

5) The scriptural pastiche. Easily half the letters have this. Sometimes you'll get a substantial excerpt, as many as thirty verses all together. Elsewhere -- I guess when Pseudo-Isidore is feeling more engaged/energetic -- you'll get a carefully edited passage stitched together from as many as twenty or thirty different verses from several different books.

6) The dates. Beginning with the first letter of Evaristus (item 14), Pseudo-Isidore provides a calendar date and consuls for each of his forged decretals. He invariably gets the consuls' names from the Liber Pontificalis. I guess he just makes up the calendar dates.

The distribution of these dates in Part I, broken down by month, is far from even: 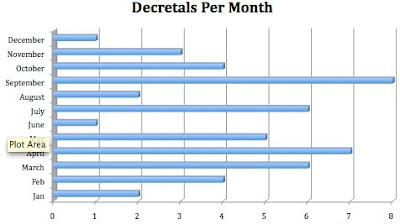 Pseudo-Isidore has his fictional popes writing a great many letters in April and September. June and December, on the other hand, are pretty dry months. Just an accident? Could this possibly mean anything? I've no idea.
Posted by Eric Knibbs at 10:15 AM