My New Book (Shameless Self Promotion) 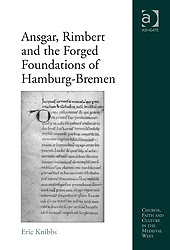 Your intrepid blogger has not always studied Pseudo-Isidore. There was a time -- yea these many years ago -- when other things claimed his interest, and one of these things was the origin of the Archdiocese of Hamburg-Bremen. And not only the origin of the archdiocese, but also that cheerful missionary Ansgar, who was supposed to have founded it; and also his successor, the still more cheerful Rimbert. The result of all this interest was a book: Ansgar, Rimbert and the Forged Foundations of Hamburg-Bremen. After much travail, it will be released on 27 October by Ashgate.

Readers of this blog will be interested and intrigued to know that I briefly mention Pseudo-Isidore on page 46! In what context does this single, isolated reference occur? For what purpose is it made? What information does it bear? Google Books will not help you. Only those who buy and read will know....

Otherwise, readers of my short tome (only 270 pages! fewer if you skip the bibliography!) will find a study of a smaller forgery operation than that organized by the Pseudo-Isidorians.

An official blurb sums it up so I don't have to:


Ansgar and Rimbert, ninth-century bishops and missionaries to Denmark and Sweden, are fixtures of medieval ecclesiastical history. Rare is the survey that does not pause to mention their work among the pagan peoples of the North and their foundation of an archdiocese centered at Hamburg and Bremen. But Ansgar and Rimbert were also clever forgers who wove a complex tapestry of myths and half-truths about themselves and their mission. They worked with the tacit approval -- if not the outright cooperation -- of kings and popes to craft a fictional account of Ansgar's life and work. The true story, very different from that found in our history books, has never been told: Ansgar did not found any archdiocese at all. Rather, the idea of Hamburg-Bremen only took root in the tenth century, and royal sponsorship of the mission to Denmark and Sweden ended with the death of Louis the Pious.

This book couples detailed philological and diplomatic analysis with broader historical contextualization to overturn the consensus view on the basic reliability of the foundation documents and Rimbert's Vita Anskarii. By revising our understanding of Carolingian northeastern expansion after Charlemagne, it provides new insight into the political and ecclesiastical history of early medieval Europe.

There was a lot of momentum behind Carolingian missionary efforts in the early ninth century. It took a while for that to peter out, and when it finally did, a few guys were stuck out in the bushes holding the bag. Ansgar and Rimbert were those guys, and they had to fiddle with the record if only for purposes of self preservation. They had to write a few bad checks. But they were smart enough, and in some ways also modest enough, for their fictions to get off the ground and for their manipulations to make a real impact. Sometime around the middle of the tenth century, after the idealized histories of Ansgar and Rimbert had been lying around for a century, people did start talking about, and accepting the existence of, the Archdiocese of Hamburg-Bremen. It's not everyday that that sort of thing happens.

Anyhow, that's the rundown. My scribblings are also available as an ebook if you need something to read on the airplane.
Posted by Eric Knibbs at 12:29 AM